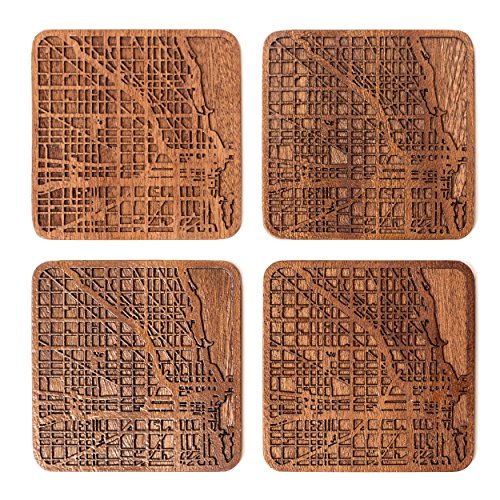 Wooden coaster with city map We have been considering applying the map on practical products. Finally, we have made it through developing this solid wooden coaster. Each coaster was developed in our workshop through a process of machine carving, manual polishing and burnishing, and painting. The whole process needs two weeks. The reason of choosing Sapele wood is that it is endowed with vintage feel. These coasters are a wonderful addition to any coffee table, kitchen or just about drink sized ledge going. A beautiful and bold addition to your coffee table, ideal for a home that loves a cuppa! These personalised map coasters in a simple yet striking design make for a perfect gift, and are equally suited as a housewarming, anniversary or birthday present. 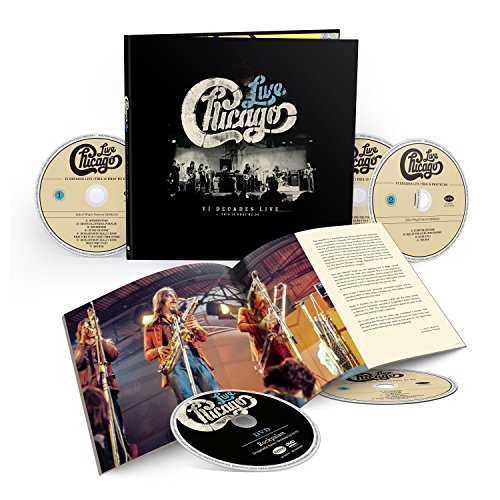 Chicago has been a concert force for more than 50 years, thrilling its legion of fans with performances that never disappoint. The Rock and Roll Hall of Famers celebrate their live legacy with a 4CD/1DVD collection of previously unreleased concert recordings, which includes several deep cuts that have never appeared on any of the band’s live albums.  -CHICAGO: VI DECADES LIVE (THIS IS WHAT WE DO) was recorded between 1969 and 2014, including the band’s entire performance at the Isle of Wight Festival in 1970. The DVD features a concert that was originally broadcast on the German music television show Rockpalast in 1977. The set comes with a 24-page booklet illustrated with rare images selected from the band’s vast archive.  -The first two discs are dedicated to Chicago’s headlining performance at the Isle of Wight Festival on August 28, 1970. It’s a snapshot of the band on the verge of superstardom and captures them in top form, playing songs from their first two albums – “Beginnings” and “Ballet For A Girl In Buchannon” – as well as “Mother” from their third album, which was unreleased at the time. The other two headliners on this 3-day festival were The Doors and Jimi Hendrix.  -The remaining discs include live performances selected from six decades, starting with a trio of songs recorded in Paris in 1969: “Poem For The People,” “25 Or 6 To 4” and “Liberation.” Other highlights include deep tracks like “A Hit By Varèse” (1973), “Takin’ It On Uptown” (1977) and “Forever” (1987), in addition to songs from Chicago’s 1994 big band tour: “In The Mood” and “Don’t Get Around Much Anymore.”  -On February 12, 1977, Chicago played live on the German music television show Rockpalast. The entire concert is included here on DVD. An amazing overview of the band’s career to that point, it boasts unforgettable performance of “Saturday In The Park,” “Just You ’n’ Me,” “Call On Me” and “(I’ve Been) Searchin’ So Long/Mogonucleosis,” plus covers of the Beatles’ “Got To Get You Into My Life” and The Spencer Davis Group’s “I’m A Man.” As a bonus, the DVD also includes the band’s fan favorite performance of “What’s This World Comin’ To” from the 1973 ABC television special, Chicago In The Rockies. 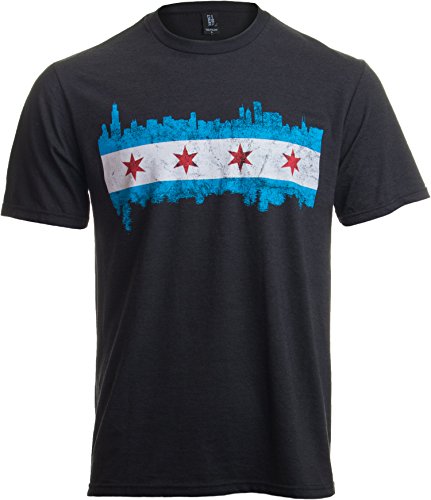 A unisex triblend t-shirt with a print or the Chicago flag in the shape of the skyline, stretched across the front chest.