Sign o' the Times is the ninth studio album by American recording artist Prince, released on March 30, 1987,[2] by Paisley Park Records and Warner Bros. Records. The album is the follow-up to Parade (1986) and is Prince's first album following his disbanding of the Revolution. The songs were largely recorded during 1986 to 1987 in sessions for albums Prince ultimately aborted: Dream Factory, the pseudonymous Camille, and finally the triple album Crystal Ball.[3] Prince eventually compromised with label executives and shortened the length of the release to a double album.

The album's music encompasses a varied range of styles, including funk, soul, psychedelic pop, electro, and rock.[4][5] Its release was supported by several singles, among them the socially conscious title track and "If I Was Your Girlfriend"; in addition to a well-received concert film of the same name. Sign o' the Times was Prince's most acclaimed record, being voted 1987's best album in the Pazz & Jop critics poll and since being ranked as one of the greatest albums ever by several publications.

Prior to the disbanding of The Revolution, Prince was working on two separate projects: The Revolution album Dream Factory and a pseudonymous solo effort, Camille.[6] Unlike the three previous band albums, Dream Factory included input from the band members and lead vocals by Wendy & Lisa.[6] The Camille project saw Prince create an androgynous persona primarily singing in a sped-up, female-sounding voice. With the dismissal of The Revolution, Prince consolidated material from both shelved albums, along with some new songs, into a three-LP album to be titled Crystal Ball.[7] Warner Bros. balked at the idea of trying to sell a three-LP album and forced Prince to trim it down to a double album.[8]

Recording This section does not cite any sources. Please help improve this section by adding citations to reliable sources. Unsourced material may be challenged and removed. (July 2012) (Learn how and when to remove this template message)

As with many of Prince's early 1980s albums, this album features extensive use of the Linn LM-1 drum machine on most songs. In addition, many songs on the album (such as "If I Was Your Girlfriend") feature minimal instrumentation, and use of the Fairlight CMI, a then state-of-the-art digital sampler. Unlike many of his contemporaries, Prince used the stock sounds of the Fairlight to create the title track. Four of the album's standout songs, "Housequake", "Strange Relationship", "U Got the Look" with Sheena Easton, and "If I Was Your Girlfriend" offer sped-up vocals, ostensibly the voice of "Camille", Prince's alter ego of this era. Of the album's diverse and varied collection of styles, AllMusic stated that "Prince shows nearly all of his cards here, from bare-bones electro-funk and smooth soul to pseudo-psychedelic pop and crunching hard rock, touching on gospel, blues, and folk along the way."[4]

We'd get the track halfway or three-quarters of the way there and then set him up with a microphone in the control room. He'd have certain tracks on the multi-track that he would use and he'd do the vocal completely alone. I think that was the only way he could really get the performance.

On some occasions, Prince recorded vocals with his back to her. Rogers monitored the vocals with a pair of headphones so Prince's recording microphone would not pick up the speakers she would usually have used. Prince typically used a Sennheiser 441 dynamic microphone (recommended to him by Stevie Nicks) for recording vocals at this stage in his career.

Though Sign o' the Times was regarded as "less polished" than his earlier efforts, Rogers points out that "we spent more time and money on Sign o' the Times than anything he'd ever done. Much more work went into it."

Two of the album's songs were first recorded in 1982 and 1983: "I Could Never Take the Place of Your Man" and "Strange Relationship". Prince did additional work on both for their placement on the Dream Factory project and involved the "Wendy & Lisa" partnership of Wendy Melvoin and Lisa Coleman on the former. When the project was canceled, "Strange Relationship" was further updated for Camille. The remaining tracks were recorded between March and December 1986. The surviving Camille tracks feature a playful sped-up vocal. "U Got the Look" was also recorded in this manner, though it was not intended for the Camille album.

Sign o' the Times produced three top-ten hit singles, the most from a Prince album since Purple Rain in 1984, although it sold modestly.[citation needed] It was his most critically acclaimed record.[17] Bart Bull, writing for Spin magazine in 1987, said that Prince's loosely organized songs are "genius" rather than indulgent and that, although there is no song as groundbreaking as "Girls & Boys", "nobody else's outtakes would sound so strong, rock so hard, swing so free."[18] The album ranked number 2 among "Albums of the Year" for 1987 in the annual NME critics' poll, and the title track ranked number one among songs.[19] Robert Christgau of The Village Voice said that the album is not a "formal breakthrough", but rather "the most gifted pop musician of his generation proving what a motherfucker he is for two discs start to finish." He particularly praised Prince's "one-man band tricks" and multi-tracked vocals, which he said "make Stevie Wonder sound like a struggling ventriloquist" and express real emotions: "The objects of his desire are also objects of interest, affection, and respect. Some of them he may not even fuck."[20] Sign o' the Times was voted as the best album of 1987 in The Village Voice's Pazz & Jop critics' poll.[21] According to Christgau, the poll's creator, the album was "easily the biggest winner" in the poll's history and "established Prince as the greatest rock and roll musician of the era—as singer-guitarist-hooksmith-beatmaster, he has no peer."[22] The title track "Sign o' the Times" was named the best single of 1987 in the poll, while "I Could Never Take the Place of Your Man" and "U Got the Look" were also voted within the top 10.[21]

In a retrospective review, Keith Harris of Blender called Sign o' the Times a "masterpiece" and comments that "never has curiosity about women strayed into so many unpredictable corners."[9] Simon Price deemed it Prince's best album,[12] as did Michaelangelo Matos, who wrote in The Rolling Stone Album Guide (2004) that it was "the most complete example of his artistry's breadth, and arguably the finest album of the 1980s".[23] Matos also believed it was "the last classic R&B album prior to hip-hop's takeover of black music and the final four-sided blockbuster of the vinyl era". Music editor Mark Brown called it "the greatest album of all time. [24] Slant Magazine's Eric Henderson deemed it a "double-disc blowout of sweat, funk, and raw, concentrated talent".[25]

Although the album sold modestly, Sign o' the Times was nominated for Album of the Year at the Grammy Awards. It is regularly ranked among Prince's greatest albums and generally considered his masterpiece alongside Purple Rain. The album produced three top-ten hit singles, "U Got the Look", "I Could Never Take the Place of Your Man", and the title track "Sign o' the Times". Sign o' the Times was Prince's first solo album after the disbandment of The Revolution.

All songs written by Prince, except where noted.

The live audience on "It's Gonna Be a Beautiful Night" is credited for backing vocals under the name of "6,000 wonderful Parisians".

Note: Except for the title track, all the singles' music videos are the scenes depicted in the concert film; however, the music video for "U Got the Look" was filmed separately. With that being said, Sign O The Times was soon performed live at the VMA and this video made it to VH1 soul, meaning all singles have videos depicted at a club and/or concert.

Signs of the Times 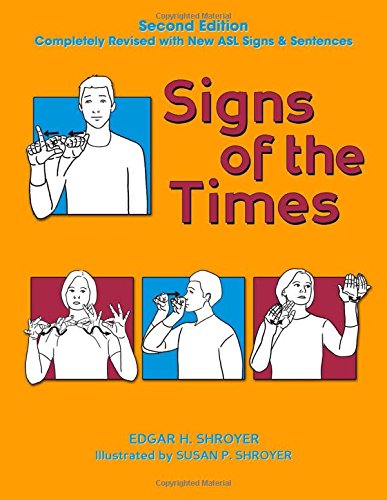 •Completely Revised with New Signs and Lessons •Each Sign Illustration Features Sentences in English and ASL Order •New Class Activities and New Student Activities for Homework or Quizzes •New Facts about American Sign Language Grammar and Deaf CultureNow, the bestselling American Sign Language textbook Signs of the Times has been completely revised and updated. The new, second edition is an excellent beginner’s American Sign Language textbook designed for use in the classroom or at home. Organized into 44 lessons, it presents more than 1,300 signs representing 3,500 English glosses. Each lesson contains clear illustrations of all signs, English equivalent words and synonyms, sample sentences to define vocabulary context, and practice sentences to display and reinforce ASL usage.Signs of the Times is a complete text that includes new class activities for teachers, plus new student activities that can be done in class, as homework, or as quizzes. The new edition features the Contextual Sign/Word Appendix, which displays groups of sentences using the same English word to show different meanings along with the corresponding ASL signs. It also provides an expanded index, vocabulary lists, and a reading reference list. The new edition offers facts on ASL grammar and Deaf culture and includes mind ticklers that enliven the lessons with hints, tips, and mnemonic devices.The new Signs of the Times expands the features that made it a standard, easy-to-use ASL textbook. Signs are repeated in sentences throughout the book to provide excellent practice for the students. The clear, easy-to-understand sign illustrations facilitates the learning process, enhancing students’ success while also making ASL fun.