Kacey Lee Musgraves (born August 21, 1988)[2][3][4][5] is an American country music singer and songwriter. She self-released three albums[6][7] before appearing on the fifth season of the USA Network's singing competition Nashville Star in 2007, where she placed seventh. In 2008, Kacey recorded two singles for Triple Pop in Austin, Texas[8].

She later signed to Mercury Nashville in 2012 and released two critically acclaimed albums on the label, Same Trailer Different Park (2013) and Pageant Material (2015).[9][10] Her first Christmas-themed album, A Very Kacey Christmas, was released on October 28, 2016.[11] Her third studio album, Golden Hour, was released on March 30, 2018, to widespread critical acclaim.[12]

Kacey Lee Musgraves was born August 21, 1988, in Golden, Texas, to Craig and Karen (née Abrams) Musgraves. Craig is the owner of a small printing business, M-Prints Printing, Inc in Mineola, Texas, and Karen Musgraves is an artist. Kacey has stated that she was born six weeks prematurely and only weighed 5 pounds. Kacey has one younger sister, Kelly Christine Sutton (née Musgraves), who is a photographer. [13][14][15][16][17] [18]

She began songwriting at the age of 8, when she wrote a song called "Notice Me" for her elementary school graduation.[17] She first learned to play music on the mandolin, then at age 12 started taking guitar lessons from a local musician named John DeFoore, which she later described as "one of the most important things that ever happened to me."[17]

Musgraves first got her start in the country music industry at the age of 18, when she recorded demos to make money.[17] Her mother would take her to local music festivals to sing western swing music.[19] She graduated from Mineola High School in 2006.

Musgraves was discovered professionally in 2008 while living in Austin by producer Monte Robison for his independent record label, Triple Pop. Musgraves' two acoustic recordings for Triple Pop (covers of OneRepublic's "Apologize" and Miley Cyrus' "See You Again") are available on a digital EP released in 2012.[20] “Apologize” (Acoustic Version) charted in the Billboard Hot Singles Chart at #23 on February 15, 2014, and racked up over 31,000,000 streams on Spotify. To commemorate the 10-year anniversary on March 30, 2018, Triple Pop released the “Acoustic Remixed” digital EP which featured newly remixed and remastered versions of the same recordings.[21][22]

Musgraves joined Lady Antebellum on the European leg of their Own the Night Tour in 2012.[23] She also signed with Mercury Nashville in 2012 and released her solo debut single "Merry Go 'Round". The song is included on her album Same Trailer Different Park, which was produced and co-written by Shane McAnally and Luke Laird and released on March 19, 2013.[24]

"Undermine", a song co-written by Musgraves and Trent Dabbs, was featured in the ABC television series Nashville on October 17, 2012.[26][27]

Musgraves joined Katy Perry on the North American leg of her Prismatic World Tour as well as Willie Nelson and Alison Krauss on select dates during their tour. Musgraves provided backing vocals for "Bourbon in Kentucky", the lead single on Dierks Bentley's 2013 album Riser.[31]

In April 2014, Musgraves won the Academy of Country Music award for album of the year for Same Trailer Different Park.[32] In June 2014, she released a new song called The Trailer Song, which she debuted on the Tonight Show starring Jimmy Fallon.[33]

Musgraves announced in late August 2014 that she would perform a ten-show headlining tour, dubbed "Same Tour Different Trailer" starting on September 25 and ending on October 19.[35]

In September 2014, Musgraves said that she had begun writing songs for her second major label album, and planned to begin work in earnest with Luke Laird and Shane MacAnally later in the year after her touring schedule finished.[36] "Biscuits," the lead single from the album, was released on March 16, 2015.

On September 7, 2016, Musgraves announced the release of her first Christmas album, A Very Kacey Christmas. The album, which features eight traditional and four original songs, was released on October 28, 2016, through Mercury Nashville.[11] In support of the album, Musgraves embarked on a Christmas-themed tour, complete with a strings section, an accordion, bass, saxophone, clarinet and backup singers.[42]

In September 2016, Musgraves was selected as one of 30 country music artists to perform on "Forever Country", a mash-up track of Take Me Home, Country Roads, On the Road Again, and I Will Always Love You. The song celebrates 50 years of the CMA Awards[43] and secured Musgraves her first No. 1 country single.[44]

In 2017, Musgraves provided backing vocals on "All the Best", a John Prine cover, for Zac Brown Band's album, Welcome Home.[45] Also in 2017, Musgraves was featured on Outlaw: Celebrating The Music Of Waylon Jennings. Originally recorded for TV, it was later released on CD and DVD. During the broadcast Musgraves performed Jennings' song "The Wurlitzer Prize".[46] Musgraves appeared on the June 21, 2017, episode of Hollywood Medium With Tyler Henry to receive a psychic reading and connect with her grandmother, Barbara Taylor, to learn more details about her death in a house fire.[47] Musgraves has said that her song "This Town", from the album Pageant Material, is about her grandmother, and that her voice appears in the opening of the song.[48][49]

In October 2017, Musgraves posted a picture of herself on Twitter indicating she was in the studio writing new songs for her upcoming third studio album.[50] On December 12, 2017, Musgraves announced the title of her third studio album Golden Hour through Entertainment Weekly.[51] The songs "Butterflies" and "Space Cowboy" were released as the first singles from the album on February 23, 2018.[52] In March, Musgraves performed at the 2018 C2C: Country to Country festival in London after previously playing the festival in 2016.[53]

Musgraves premiered the third song from the album, "High Horse", on March 22, 2018, on Zane Lowe’s Beats 1 Apple Radio show.[54] On March 29, 2018, she performed “Slow Burn” on The Late Show with Stephen Colbert.[55] Golden Hour was released on March 30, 2018, on MCA Nashville.[56] Through June and July, Musgraves was the opening act on the second North American leg of Harry Styles: Live on Tour.[57] Musgraves will embark on the Oh, What a World Tour in October 2018 in support of Golden Hour.[53]

Musgraves lists Alison Krauss as one of her career role models, stating "I mean, how many Grammys does she have? She's just remained solid and true and great, and I respect that".[58] Musgraves' favorite artist is John Prine.[59]

Musgraves also lists Lee Ann Womack as one of her childhood influences: "Lee Ann Womack is from near where I grew up in east Texas so I've always looked up to her."[60] Speaking of both Prine and Womack, Musgraves stated that "if I could sing it like Lee Ann would and say it like John would, then I feel like I've gotten somewhere".

Musgraves is known for her progressive lyrics in the conservative country music genre. Her music has tackled controversial topics such as LGBT acceptance, safe sexual intercourse, recreational marijuana use, and questioning religious sentiment.[citation needed]

In an interview with the Wall Street Journal, Musgraves talked about criticism she faced for her rebellious lyrics. "I think throwing the rebel card out there is really cheap," she said. "The things I'm singing about are not controversial to me, I don't push buttons to push buttons. I talk about things that have made an impression on me that a lot of people everywhere are going through."[64]

In 2014, in an interview with ABC Radio, Musgraves said she had been in a relationship with her bandmate Misa Arriaga for several years, after becoming friends first.[65]

Musgraves eventually met Ruston Kelly at the Bluebird Café in Nashville. In May 2016 they had a songwriting date, and they began dating shortly after. Musgraves has stated that the song "Butterflies" from her album Golden Hour is about her courtship with Kelly.[14][66] On December 24, 2016, Musgraves became engaged to Kelly.[67] They married on October 14, 2017, in Tennessee.[68] 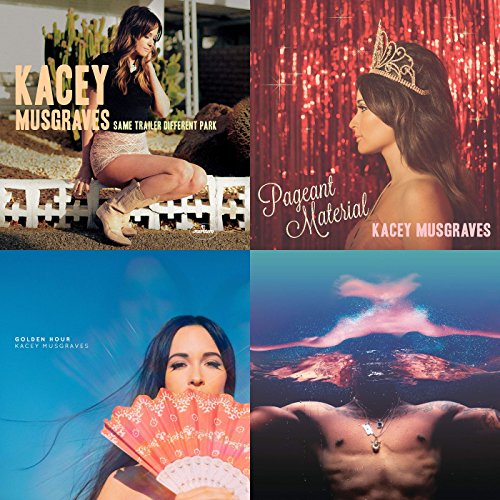